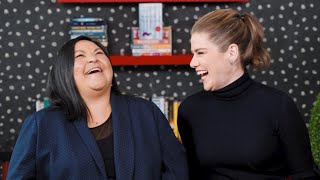 Letterkenny actress Kaniehtiio Horn will defend Eden Robinson's novel Son of a Trickster on Canada Reads 2020. Ahead of the debates, the actor and author chatted about what really lies at the heart of the award-winning supernatural novel.

Son of a Trickster tells the story of a 16-year-old named Jared who is known in his community for making the best weed cookies and for having a scary mom. Jared takes care of his struggling family the best he can and shrugs off the fact that the ravens are talking to him.

The debates take place March 16-19, 2020 and will be hosted by Ali Hassan. The debates will be broadcast on CBC Radio One, CBC TV, CBC Gem and on CBC Books.

➤ Find out more on https://cbc.ca/canadareads.


About CBC:
Welcome to the official YouTube channel for CBC, Canada’s public broadcaster. CBC is dedicated to creating content with original voices that inspire and entertain. Watch sneak peeks and trailers, behind the scenes footage, original web series, digital-exclusives and more.

Who Are They Reconstructing Faces Of The...
The Fifth Estate
views   4 weeks ago

Ellen Meets Uplifting Husband And His In...
TheEllenShow
views   1 week ago