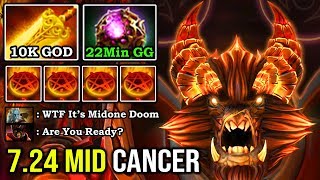 ► This Video Shows: How to Solo Mid with an IMBA Forgotten Hero in New Patch Update 7.24 Like a 10K MMR Doom and 100% No Escape Allowed.

► I include in the video all information you need such as item build, skill build, how to play, map awareness and every single details you should know to be a better player in DotA...
I also changed the terrain of the game to make it looks better!
Dota 2 has 117 heroes, it's not easy to learn, so be sure to focus every move in this video.
Quality education videos that you can only find on my Channel.

► What Do I Record and Edit Video with ? I Record with OBS Studio and edit the video with Premier, Resolve, Sony Vegas Pro 15, Adobe After Effect and of course Thumbnail with Photoshop.
I Spend a lot of Time to Edit, so You Better Like This Video :)

»»Every Details About the Hero in This Tutorial

►Hero: Lucifer, the Doom, is a melee strength hero with strong farming capabilities, good versatility, and one of the strongest single-target disables in the game. His very low starting armor makes him vulnerable to harassment, but his abilities and high health allow him to lane or even jungle quite effectively. A ruthless demon, Doom possesses malicious abilities revolving around greed, fire, and death. His Devour ability allows him to consume creeps, granting regeneration to offset harassment, providing additional gold and allowing him to absorb their powers, using them to increase his own strength. Because there are numerous neutral creep abilities to choose from to supplement his other abilities, the role that he chooses to play is quite flexible. Scorched Earth allows him to chase or escape effectively, all while slowly burning his enemies. He can deal tremendous damage with Infernal Blade, an attack modifier which mini-stuns enemies and deals damage over time, based on their maximum health, making it a powerful nuking ability that scales into the late game. Finally, his namesake ultimate Doom serves as one of the strongest single-target lockdown abilities in the game. A unit afflicted with Doom takes intense damage over a lengthy duration while having all its active abilities - even those from items - completely silenced. With numerous expensive items in his arsenal and a key enemy hero rendered useless for a teamfight, a farmed Doom ensures that nobody can extinguish his flame.

BRINGING BACK PHYSICAL EMBER Next LVL Do...
Kryptonill Gaming
views   2 weeks ago